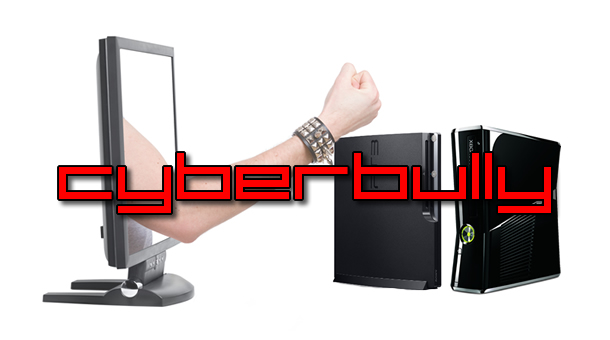 In this reprinted #altdevblogaday-opinion piece, Itzy Interactive’s Kyle Kulyk looks at the cyberbullying problems present in games and gaming sites, and what users can do to combat them.

Bullying hurts the gaming experience. Full stop. We’d like to think of gamers as a great inclusive bunch but bullying among gamers whether on gaming forums online or via gaming networks is a huge issue, especially among children.

It’s not simply a matter of switching off, as online gaming itself is socially relevant in kid’s lives – so what exactly can be done to curb this issue by gamers, parents and developers alike?

If you’ve played games online, you’ve probably been a victim of or been a witness to online gamer bullies. These faceless players insist on leaping over the line of good-natured trash talking to dive head first into the pool of homophobic, racist, profanity laden insults, emerging like a sheep dog to shake off and coat anyone who happens to have ears.

I remember stumbling into a conversation in a match of Call of Duty in which two U.S. teens were actually trying to justify their use of racial slurs to two Brits who had taken offense.

A few years ago, Microsoft filed a patent for software that could actively filter real-time audio streams but until something like this comes to pass, how can we protect ourselves and our kids from becoming a victim of continued and often targeted harassment during online gaming?

There will always be a subset of gamers who exist to ruin the gaming experience of others, but why do we as a community tolerate this behavior?

As more gamers than ever before flock online, the anonymity the internet offers has brought out the worst in some gamers, and there are gaming sites that have no issue catering to and encouraging this type of harmful behavior through inflammatory articles written specifically to pit gamers against each other or by turning a blind eye to the problems their sites help facilitate.

While all gaming sites struggle with this issue, some sites are able to handle the issue of bullying better than others. Popular news aggregate and game discussion forum, News For Gamers, (or N4G) is an example of a gaming site that not only turns a blind eye to bullying among its threads but offers cyber bullies digital tools to further harass.

As a long-time and opinionated member of the N4G community, I have personally been on the receiving end of my share of bullying and can attest to the ways which members and staff use N4G’s failed policies to harass other gamers. For reasons that can only be described as bizarre, N4G has long implemented a system whereby users are given the tools to anonymously attack other users, effectively censoring gamers from sharing their opinions.

This system is linked to a report and reward system. Flag a comment as interesting, that user may be allowed to post more comments. Post something offensive, the community may actively remove this ability of users to share their insights. In this way the moderators can wash their hands of their moderating responsibilities by leaving it the community to police itself.

In actuality, the result is a gaming forum that is rife with cyberbullying, as vindictive users create multiple accounts to increase their status while removing other gamer’s opportunity to share their opinions while belittling members in the discussion threads. Once this behavior starts, I’ve personally seen it escalate to cyber-stalking as N4G members have actively harassed me across other sites. N4G’s failure to police its own site makes it a breeding ground for this type of behavior and emboldens cyber bullies.

So where are the moderators in all this? Often engaging in the same provocation. Again, I’ve personally had a moderator censor my posts, suspend my account, and threaten further bans if I didn’t bring my views in line with his own. I was subjected to threats after the moderator repeatedly censored my posts voicing opinions critical of certain Microsoft business decisions in threads discussing that very topic (while oddly I was given a pass for criticisms related to Sony and Nintendo).

On numerous occasions, I attempted to bring this harassment to the attention of site administrators but the issue went unaddressed for over a year until I escalated the matter further. I’ve been assured now that this moderator would not moderate my account in particular, but how many gamers has he bullied in the past? What’s to stop him from bullying more in the future?

This apathy towards the bullying on N4G turns to downright hostility on the site’s forums when gamers who question the existing censorship system or put forth alternative methods of moderating the discussion threads are met by condescending and derisive comments from staff and other users. And so the bullying and use of censorship as targeted harassment continues.

One way to combat this behavior is through the use of reporting tools. I feel developers have at least some responsibility to help combat this problem as opposed to simply shipping a product and letting the chips fall where they may.

If you make an online game, you generally want that online experience to be as enjoyable as possible for your players. If that’s the case, why not take the effort to create reporting tools for gamers who are victims of harassment?

Or if reporting tools exist, make them as accessible as possible. A bullied child isn’t going to sift through multiple menus to file a lengthy report. They’re going to either endure the bullying, mute the bully, or move on to another game.

None of these options addresses the cause of the problem, the harasser themselves, and so bullying continues to grow and cases escalate. If you’re making a game with an online component, how much thought have you given to creating a safe, harassment-free environment for your players?

Attitudes need to change. The biggest thing we can all help with is to create awareness of the problem. Bullied individuals suffer from low self-esteem, depression, feelings of insecurity, anxiety and in some cases these have contributed to suicides.

As parents, know the signs. Bullied kids often spend more time at the computer or console, trying to have their voice heard. Are your kids evasive about internet use? Have their habits changed? Are they fearful or emotionally distraught after a gaming or online session? And for the love of all things holy, know what your kids are playing and become involved.

So what can be done? For starters, as gamers, we can do something! The biggest problem currently aside from the harassment itself is the apathy towards the situation. You might be fine with just muting someone, but what if it’s someone you care about who faces the same harassment next, or their children, or your family? Use the reporting tools available. I’ve voiced this concern multiple times on multiple forums, and inevitably someone will comment, “That’s what the mute button’s for. Duh.”

If I go to my local grocery store and a staff member or random stranger follows me around flinging insults at me, I could just put in earplugs or shop elsewhere — but why should gamers who just want to play or express their opinions be the ones who are silenced or forced to move on?

Educate yourself on what you can do. If someone is constantly harassing you online or cyber-stalking, know your rights and know what steps you can take to address the issue. No one is anonymous on the internet. If a site’s being used for bullying, escalate the issue.

If the site refuses to address the issue, talk to your service provider. Service providers often have strict terms of use agreements and they have the ability to see and notify of crimes committed on other networks, including harassment. There are steps you can take so you don’t have to be a victim. Ignoring the issue helps no one.

As developers, we need to discuss the issue and come up with new ideas for improving the gaming experience for all players and we can help raise awareness. Gamers tend to listen to developers. This platform should be utilized. We can use our websites, blogs and Twitter feeds to help promote the message that no one should have to endure bullying in any form.

Gamers shouldn’t face bullying alone. We can make a difference and the first step is to stop ignoring the problem by hitting the mute button and moving on.

Actual response to a cyberbullying discussion on Gamespot forums:
“haha cyberbullying.. i always get a kick out of people saying that. we’re raising a generation of pansies. can’t even deal with people calling them names over the internet.. sad.”

[This piece was reprinted from #AltDevBlogADay, a shared blog initiative started by @mike_acton devoted to giving game developers of all disciplines a place to motivate each other to write regularly about their personal game development passions.]