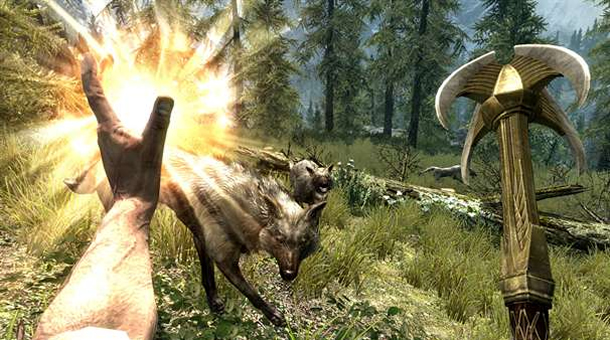 Let’s be honest here. Whilst the technology behind the Kinect is certainly impressive, the games that employ it have hardly been impressive. The only exception that comes to mind is Mass Effect 3 and the way it utilises voice recognition so that you aren’t ‘forced’ to pause the game in order to give commands to your squad mates. It is an interesting move not only because it potentially enhances the immersion in the game but also because it does give you a distinct advantage as mentioned above. So with news that The Elder Scrolls V: Skyrim will also be supporting Kinect (a free update on Xbox 360 is due next month), are we beginning to see the true form of Kinect coming to light? Now we can scream “FUS RO DAH” and have it do something?

Ever since its release, Microsoft and the Kinect have been ridiculed because of the lack of support for ‘core gamers’, with the vast majority of titles of the Kinect being more akin to your traditional Wii-fare. Early promise has been shown with glimpses into games such as Ryse and the upcoming Ghost Recon Future Soldier but other than the latter, nothing else has impressed core gamers. The recent release of Star Wars Kinect has only but reinforced the distaste amongst many gamers for the Kinect.

Luke, for once, we feel your pain!

Our main criticism regarding Kinect support for Skyrim is that it is limited to mere voice commands. Surely this could be supported via a normal headset? Also, what about motion tracking? Imagine casting spells with both hands or waving a sword and using the shield. If implemented correctly, that could potentially silence the army of naysayers of Kinect.

Kinect support for Skyrim is nonetheless an interesting development and we hope that the hardware is utilised similarly for more and more titles.