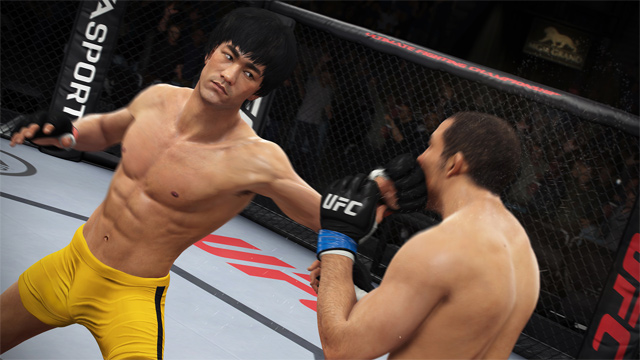 Look who’s joining the UFC scene, none other than the Father of Mixed Martial Arts himself, Bruce Lee. “My initial thoughts were, how in the hell did EA put a legend like Bruce Lee in their game? This wreaks of big money looking for a payday at the expense of a fallen hero’s memory.” Then the PR patrol skillfully included positive feedback by the living daughter of Bruce Lee, Shannon Lee, and smoothed everything out lol. A girl has to eat, right? Though I’m not a UFC fan, I’m interested to see how well Bruce Lee has been integrated into the game. Who knows, maybe he has special powers and super speed haha.

Via GameTrailers: EA announced today that the legendary Bruce Lee will make his virtual way into the Octagon in EA Sports UFC, which is set to arrive on the Xbox One and PlayStation 4 in late June. Those determined to duke it out with the ‘Enter the Dragon’ star can pre-order today to get instant day-one access to Bruce, or they can complete the game’s career mode at Pro difficulty to unlock him. As for what to expect of his presence in the game, players can fight with Bruce across four different weight classes and test his legacy against the best of the best in the UFC. “I am so excited about this opportunity to bring my father back to videogames!” said Shannon Lee, Bruce Lee’s daughter, CEO of Bruce Lee, LLC and Chairperson of the Bruce Lee Foundation. “I’m thrilled that fans can now interact with him in a new way. The EA SPORTS UFC development team has been incredible to work with, and they’ve done a great job capturing the look and feel of my father. I think people will love getting a chance to fulfill a fight fantasy by playing Bruce Lee in the new UFC game.”