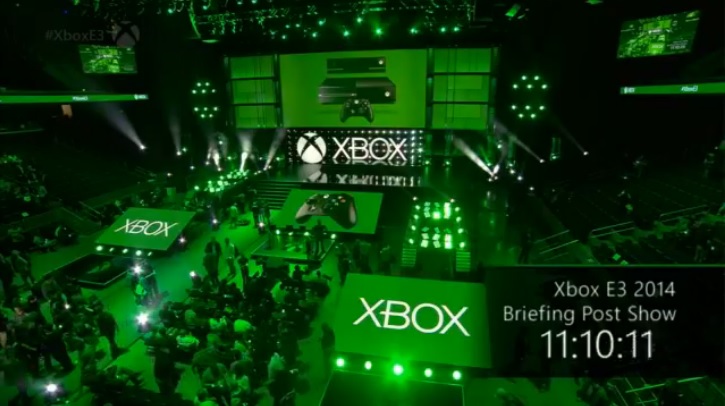 Cinematics are awesome as usual with this new iteration of the COD Franchise. I won’t spoil it for you, just know that your weapons are state of the art, and it looks like fun 🙂

From the opening scene the music will capture your imagination. Side note: Track name is “Revolution by Ummet Ozcan”. The host says it is in a glorious 1080P, with instant online connectivity, and club/community environment for you and your friends. Plus an exclusive Lamborghini whipping around in a yellow. Very Nice.

From the makers of Left 4 Dead, Exclusive Beta & DLC First On XBox; Here comes the monster killers! It’s a 4 verses 1 where you can either be 1 of the hunters with multiple classes or choose to be the monster wreaking havok on the hunters. It looks fantastic 🙂

This was all about collaboration missions with 4 friends to take down the bad guy. The theme of E3 2014 was largely about Co-Op integration and this game was no exception. It felt like more of the same from this franchise as there wasn’t any standout features that hadn’t been seen before. The 4 player Co-Op felt more like something that should’ve been there years ago, but was included this time around to sell the latest copy of AC. The game looks marvelous but that’s no surprise, it’s AC after all.

Premier Content is 1st on XBox One. So there’s a huge dragon and some heroes are shooting it to death. Once again, it’s a Co-Op situation and there’s nothing wrong with that. Who doesn’t like playing amazing games with friends? One thing I can say is that dragon is pissed lol. There’s a vague story alluding to a quest of epic proportions and a famine ailing the people. Gotta see it to appreciate the story. Pretty sick.

At first you won’t be sure if this trailer is even Sunset Overdrive LOL, but that quickly changes 😉 This is super entertaining, and it’s already a smash hit and we haven’t played a second of the game. Can’t wait for this one!!

Let me put it to you like this! XBox One might not have as many games in mass quantity, but they make up for it in quality. When you see this Launch Trailer you’ll think went into some alternate reality where no of this is actually real… BUT IT IS!!! Get ready for the “Super Ultra DeadRising 3 Arcade Remix Hyper Ed. EX Plus Alpha” version of Dead Rising 3. Just watch the trailer!

Let’s be honest, no one is actually looking to get this game but apparently someone is sneaking into game stores to pick it up o_O Wait till I catch you on camera lol.

We’ve been waiting for this game for some time, Fable has great story telling. This game seems to have a focus on 4 player Co-Op vs. 1 enemy who can also be a friend/player who sets traps against you 🙂 Very cool.

We start off with 2 heroes and they start showing up the various worlds that we can make with Project Spark. I think this game is a major player in the longevity of XBox One. It’s probably inspired by Little Big Planet, but it goes much further to the point that it nods at “Conker”; a game that could potentially be developed using Project Spark. Sweet!

Ori and the Blind Forest – Trailer

Talk about knocking it out the park o_O This super cute, super sad, super terrifying, super awesomeness is going to be a major title over the years to come!

This is the reintroduction of Halo to the new generation. It includes Halo 1, 2, 3, and 4 – All on 1 Disc with everything unlocked – – It’s the 10Year Aniversary Edition – They’ve all been remastered to have updated graphics but at the touch of a button the classic/original graphics can be brought back. – Enjoy it in Full 1080P – It will ship with 4000 gamer score. – PLUS – Halo Night Fall. What more can a gamer ask for?

Survival game with a kid that appears to be trying to get outside and all the dangers around and hopeless of not being able to get beyond the glass. What is “Inside”?

This appears to be a continuation the last Tomb Raider game. The psychiatrist clearly doesn’t realize who he’s speaking to and Ms. Croft is growing into her own 🙂

We get to traverse the countryside and track down a wild beast for ransom. Tracking and battle skills are seen, not to mention skills with the lady. Enjoy!

There isn’t much that is explained other that what you seen in this trailer. It looks to be mystical/spiritual battle between good vs. evil. Let the sparks fly!

I’m not sure what to make of this game it feels like “Iron Man” in Medieval Times o_O But like Iron Man, all that helmet action is very cool.