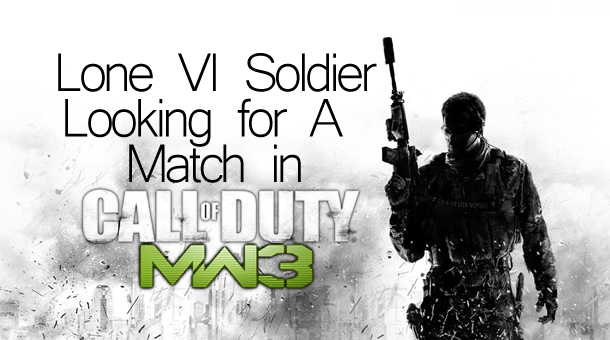 Ugggh! I’m already upset at the fact that MW3 took out my “diving ability” (from Black Ops) and is running on a dated MW2 engine, but I digress. Why am I now forced to wait up to an hour (if I’m lucky) to get into ANY match?! Let’s see… I went from COD4 “lagging”, to MW2 “Awesomeness”, to Black Ops “Holy-Crap-I-didn’t-Notice-the-Match-Already-Started”. Now I’m at Modern Warfare 3’s “Are We There Yet?…(an hour later)…Are We There Yet?” I have to “Join a Match” with friends who happen to have an open slot in a match or lobby just to play. Basically I’m forced to play what they’re playing; No choosing for me… feeling like a begger who spent extra coin on Modern Warfare 3 Hardened Edition. Ugggh!

I know what you’re thinking…  Calm down, its just that MW3 is so popular right now and your connection isn’t the fastest in town. If I were stupid I’d agree with you, but I’m not. Here are the facts…

I’m not making things up after all…

Turns out that Infinite Ward was previously ignoring the fact that their weighted matchmaking issue only catered to those who lived in a dense population of MW3 players. Everyone else like people in the Caribbean was suppose to “suck salt”. I can’t speak for my Caribbean neighbors [feel free to chime in on this issue bros.], but its reassuring to know this issue isn’t just happening here in St. Croix, U.S. Virgin Islands; and the issue has been added to Infinity Ward’s “list of fixes/updates” to come. But how long will the lesser dense MW3 area’s be left to wait? 1 month or 3 months? I’ll tell you one thing, Black Ops doesn’t feel so out dated right now.

F.Y.I. This article is based on my personal experience with Modern Warfare 3 Hardened Edition on the XBox 360.