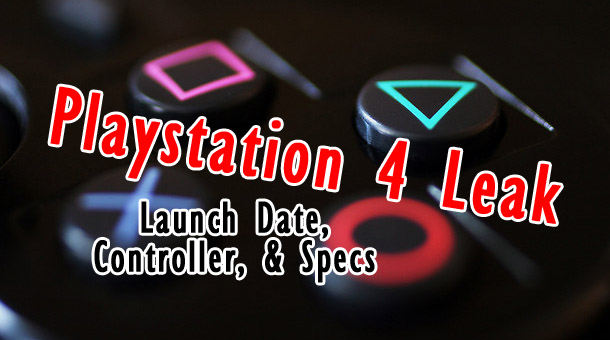 Edge-Online has gone live with a massive expose of the PlayStation 4, a console seeing an announcement on February 20th, in New York City. The Edge-Online leak says the console will be more powerful than the next Xbox, will be easy to code for, and will feature a new controller that’ll include a touch screen in the center. As ever, we’ve included the full write up, quench it below.

Development sources with working knowledge of both next generation consoles have told us that PlayStation 4 will be more powerful than the next Xbox, will ship with a redesigned controller and launch by the end of the year in Japan and the US. PlayStation 4’s European launch will follow in early 2014.

Sony is set to reveal its next PlayStation on Wednesday February 20th at an event dubbed ‘see the future’. Sony Computer Entertainment released a teaser video last night to announce the event. Below, our sources revealed what to expect from PlayStation 4.

Sources close to the hardware have revealed to us that PS4 will ship with a redesigned controller which is the same size as an existing DualShock but features a small touchpad in place of the existing Select, Start and PS buttons. The tech is based on Vita’s rear touchpad, and is similarly responsive in use.

A new Share button on the controller will, when pressed, launch a new feature that will allow screenshots and video to be distributed online. The PS4 hardware will continually record the most recent 15 minutes of onscreen action (with no processing penalty, claims our source), which users will then be able to edit and broadcast via the Internet.

We’re told that PlayStation 4 will launch in Japan and the US by Christmas, with a Euro rollout following in early 2014, the delay attributed to the complexities involved in European distribution. Alongside the console, Sony will also introduce a new, improved iteration of its PlayStation Eye peripheral, which remains compatible with the PlayStation Move controller. Move will be available at launch, but it’s not clear yet whether it will be bundled with the hardware.

Sony has already earned an enormous amount of goodwill among studios working with PS4 development hardware. Privately, Sony representatives have conceded that the company made a mistake in creating such esoteric architecture for PS3, and its strategy for PS4 gives developers more opportunities this time around, notably because the hardware is much more PC-like in its makeup than PS3.

We have confirmed with sources that recently leaked tech specs are accurate. Though Durango devkits offer 8GB of DDR3 RAM, compared to Orbis’s 4GB, Sony’s GDDR5 solution is capable of moving data at 176 gigabytes per second, which should eliminate the sort of bottlenecks that hampered PS3 game performance. Importantly, we’ve learned that Sony has told developers that it is pushing for the final PS4 RAM to match up to Microsoft’s 8GB.

Both platforms are driven by eight-core AMD CPUs clocked at 1.6GHz, with Microsoft opting for a D3D11.x GPU from an unknown source and Sony utilising a more capable solution in AMD’s ‘R10XX’ architecture, alongside the so-called ‘Liverpool’ system-on-chip.

It’s clear Sony has designed a system that, on paper, outperforms Microsoft’s next Xbox. One source familiar with both platforms tells us that in real terms Sony’s console is “slightly more powerful” and “very simple to work with”.

Ultimately, the performance differences between the two consoles will have as much bearing on multiplatform releases as the differences between PS3 and 360 – very little – but Sony will be expecting big-budget firstparty releases such as the PS4 Uncharted sequel to demonstrate its console’s superiority.