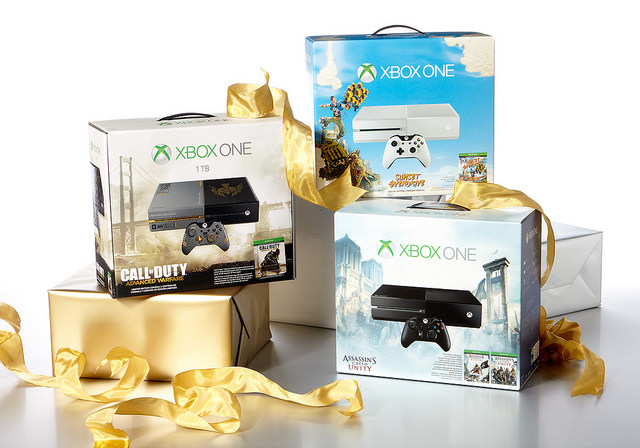 Xbox One Available for $349 in the U.S. This Holiday Season

The Season of Xbox will begin on November 2, when Xbox One will be available for a special, limited-time promotional offer of $349 in the U.S. Special promotional pricing of $50 off the console of your choice applies to any Xbox One console, including special edition bundles, offering some of the year’s most anticipated games – Assassin’s Creed: Unity, Call of Duty: Advanced Warfare, and Sunset Overdrive.

This holiday, fans have more options to choose from with several exclusive bundles available at $50 off including:

This special promotion will be available nationwide at most major national retailers in the U.S., including Amazon, Best Buy, GameStop, Microsoft Stores, Target, Toys ‘R Us, and Walmart.

Fans will have a broad portfolio of amazing games on Xbox One this holiday. Only on Xbox One can you play exclusive games like Halo: The Master Chief Collection, Sunset Overdrive and Forza Horizon 2, plus the newest blockbusters such as Assassin’s Creed: Unity, Call of Duty: Advanced Warfare, Destiny, Dragon Age: Inquisition, FIFA 15, Madden NFL 15, Grand Theft Auto V, Minecraft and dozens more this holiday.

Offer valid November 2, 2014 through January 3, 2015 at participating retailers. Regional availability and timing outside the U.S. will vary.

By Jeff Rubenstein via Xbox One Available for $349 in the U.S. This Holiday Season – Xbox Live’s Major Nelson.