Chronicle’s Michael B. Jordan Role As “The Human Torch” Will Be Amazing! 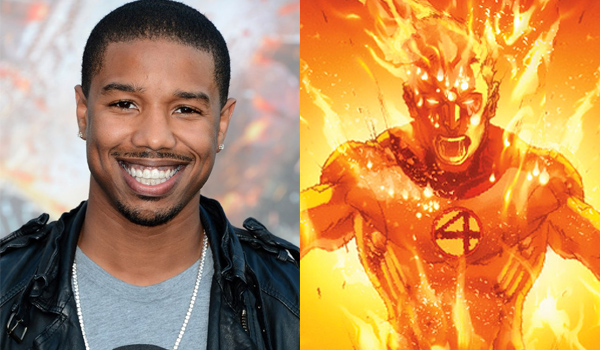 Chronicle’s Michael B. Jordan (Anyone else notice his name is “Michael Jordan” lol) is rumored to be the next Human Torch of the Fantastic Four Reboot. There’s no prior comic book illustrations (by Stan Lee) of the Human Torch being a black man so this is a historical shift in comic book culture. When Samuel L. Jackson played a traditionally white Nick Fury [Update: A black “Ultimate Nick Fury” 1st appears in 2001′s Ultimate Marvel Team-Up #5 – Fun Fact: He was modelled after Samuel L. Jackson; who later plays Nick Fury in The Avengers] no one batted an eye at the idea. I imagine it’s because Sam knocks out virtually every character role he plays and Nick Fury wasn’t exactly a headlining character that would ruffle feathers when his skin color changed. Michael is one of those guys you just enjoy seeing on screen, I can’t imagine a better actor to take the “color shift leap of faith” into the Human Torch. Can’t wait to see this movie if it’s ever released. Keep reading to see Jordan’s take on it…

Jordan has been in talks to play the Human Torch in Twentieth Century Fox’s “Fantastic Four” reboot. He acknowledges the possibility, but says, “That’s not real yet.” The film is to be directed by Josh Trank, who cast Jordan as one of three high school friends who gain superpowers in “Chronicle.”

If Jordan were to be cast in “Fantastic Four,” he would be the rare black actor to assume a superhero role.

Jordan acknowledges that some will prefer the continuity of the Human Torch remaining white, as he is in the comics. But he thinks the character’s most identifiable qualities have little to do with race. (Jordan’s character in “Chronicle” was also originally scripted as white.)

“I’m all about breaking barriers and changing stuff,” says Jordan. “It’s 2013. We’ve got a black president. Times have changed.”

Smiling, Jordan says: “It feels good. It feels good to get to a place where I can be creative and selective about certain things I do. I’m really curious to see what’s next.”